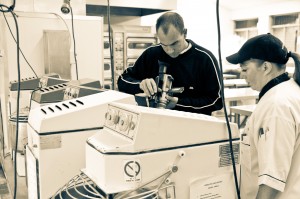 This project with the Baking staff at Polytechnic West established a number of objects for a digital content repository which was a significant step towards the generation of just-in-time training. The main objective was to establish a series of pieces of content that could be used to flesh out a story of the making of a white loaf.

These content objects, movies, text, audio and even powerpoint, formed the basic building blocks of making the white loaf. This was called a work task, something that happened in the real world of Baking in a commercial bakery which required the application of a number of competencies which mapped to the regular curriculum. The objects could be used in learning the existing curriculum or in the new work task.

However, instead of creating two sets of objects, one set was created which could be used in either context. These could build up to a content object repository which could then be used in multiple courses, in gap training or on-the-job refreshers.